I don’t give a shit! 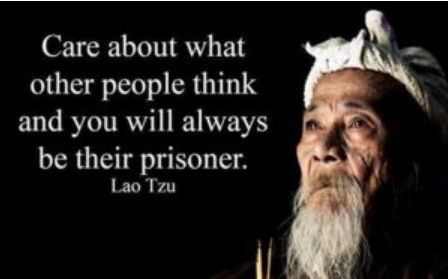 Care about what other people think and you will always be their prisoner.   ~Lao Tzu

Bull-oney! The logical extension of Uncle Lao’s to “not care” about what others think is Jeffrey Dhamers or any other sociopath you care to mention. Or someone far out on the autism spectrum. Human beans evolved as social animals where getting along with and being accepted by the group was essential to survival. In the past, survival meant literal life and death. In modern societies, at least in the West, it means an inability to survive socially. Some are capable of more independent living than others, but even the hermit in the cave needs people to come along from time-to-time, point and declare “Oh, look at the hermit!”

Naturally, I prefer people to say “Good Rex! Good Rex!” give me a scratch behind the ears and a nice treat . . . rather than “Bad Rex! Bad Rex! Go to your box!!!” However, even though I greatly prefer the former rather than the later, it is NOT the end of the world if I don’t get it. The solution is (excuse the double negative) not “not caring.” The solution IS caring, but not so much that I allow it to run my life, and especially that I allow it to make me miserable. Dr. Ellis writes extensively about what he calls “The dire need for love and approval” as a major driver of misery and neurosis in society. Listen to him in his own words.