“Beat me!” pleaded the masochist. 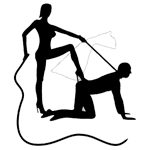 Beat me!” pleaded the masochist. 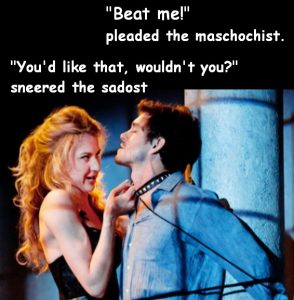 “Beat me!” pleaded the masochist. “You’d like that, wouldn’t you?” sneered the sadist.

Remember the old joke: Just because I am paranoid, doesn’t mean people aren’t really out to get me! Jokes aside, sometimes someone or someones really ARE out to get you. However, I think these cases are actually pretty rare, and even in such cases, the two peeps may be playing out a sort of dominant-submissive scenario, a kind of dance between the bully and the victim. Having said that–and this is the important thing–most of the time, none of that applies.

“Beat me!” pleaded the masochist.
“You’d like that, wouldn’t you?” sneered the sadist.

Most of the time, I reckon, what we perceive as deliberately hurtful behavior is really just two peeps pursuing their own self-interests and getting in each other’s way, sort of stepping on each other’s toes in the process. That does not excuse hurtful behavior, of course, but understanding this process can take some of the sting out of a conflict and give you the “breathing space” to attend to the situation or the relationship more rationally and helpfully.