The dog ate my homwork!

If you want to skip the essay and get right to today’s homework, click me.

Some learning REBT-CBT wish that pesky “B” for behavior was not a part of the equation. Fortunately or unfortunately it is. Not only that but both Drs. Ellis and Beck originally introduced their systems as RET and CT respectively, probably assuming that a change in thinking and emoting would result more or less spontaneously in a change in behaving.  It didn’t take them long to realize, however, that (my own words) thinking, emoting and behaving are all of a piece, are strands of a spiraling helix in intimate embrace, inseparable except as an artificial  learning tool. At least in theory, you can 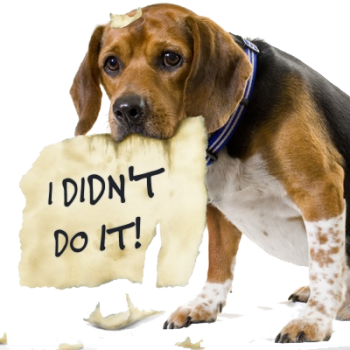 intervene at any point in the process (thinking, emoting, behaving, biochemical, environmental) to facilitate a change in behavior. However, depending on which “entrance point” at which you choose to intervene, the process may be more or less challenging. For example, I imagine we have all had the experience at one time or another of beginning to react emotionally to a situation but for some reason we are especially self-observant in that moment and simply decide that reacting is not worth it, not helpful, not what we really want. Sometimes we can just shut the reaction down in it’s tracks before it has a chance to get to a boil. It produces a wonderful feeling of being in control when that happens, and naturally it would be a good idea to make it happen more often, but at the same time it would be a mistake to imagine that  we have that much control at the emotional level and are able to do if as easily the next time.  Emotions are very powerful and will tend to have their way.

So, yes, while we theoretically can intervene at any point, REBT-CBT guys realize that working simultaneously on thinking, emoting and behavior is the most powerful approach and gives us the greatest possibility for real and lasting change.  Psychoactive medicines rarely produce lasting changes, but for some clients in some situations, may represent a fourth strand in our helix and may give a much needed boost to the entire process.

Which brings us back to homework. Homework (or Action Plan as the Beck Institute has been referring to it since January 2016) allows us to work directly on the behavior strand which can not only confirm but also reinforce preceding work we have done on the thinking and emoting strands. An easy to grasp example would a client working on, say, a fear of public speaking.  It seems pretty obvious that after working with the distorted thinking and irrational beliefs with may be creating anxiety about an upcoming speech, the next step is to actually give the speech and realize in a visceral way that while anxiety is uncomfortable, it is in fact not dangerous and can be experienced safely without ill effects, and that it passes.This is an especially important point, and one which REBT and Buddhism share; the temporary, transitory nature of emotions.  In fact to work on a fear of speaking only in the cognitive-emotive side and never following up by actually giving a speech doesn’t make much sense.

So, home work is important but  it need not feel as emotionally risky as the above example of giving a speech.  Or it may. There are different types of homework activities for different purposes to accomplish various goals that exist all along the risk spectrum. One of the classic, sort of generic shame attacking exercises suggested by REBT-CBT is to visit a mall and as you walk, drag a banana attached to a string behind you as if you were walking your pet. Now some people with artistic, flamboyant personalities might find this exercise quite mild, even fun. To some others, more private types, it might be bone chilling.

In University, you have have been taught that it was weak to use phrases such as “In my opinion” in essays and formal debates.  This may have been proper advice decades ago, but detached formality for the sake of style is not emphasized today, and more of a first person narrative–which is what an essay actually is in any case–is usually acceptable or preferred.  The point as it applies here is that some people have developed–using the popular word today– a “phobia” about prefacing remarks with variations of “In my opinion . . .”  From the REBT standpoint–indeed from the standpoint of mental health in general–this is very unfortunate for a number of very important reasons.

This preamble was necessary, I think, to establish that this week’s homework,  is NOT an “academic exercise,” it is not about rhetoric, or etiquette or elements of style.  It is about mental and emotional health, plain and simple.  It is about  training yourself in healthy thinking, emoting and behaving, and in doing so to possibly help others to do likewise, and generally doing “your part” do dial back the inflammation that is tragically so much a part of modern life.

And please don’t should on others!

Doing this consistently and faithfully and really “wrapping your head around it” will make you feel better, have much greater clarity in your communication with other people. Most of all, it  will grow your character and “self-esteem,” help you to become more reality-centered and  authentic as as you practice really taking responsibility for what you think and believe and say rather than relying on some probably dubious or even imaginary authority “out there”

Please use the comments box below to share your experience with the gang, and thanks very much for participating.

Follow me
Latest posts by Rex Alexander (see all)
Please share the love . . .
4
Shares
... other posts by admin