Click the link to watch a video about Harlow’s famous Monkey Experiment (may be disturbing to some) followed by Dr. Ellis’s wonderful lecture about the “Dire Need for Love and Approval” 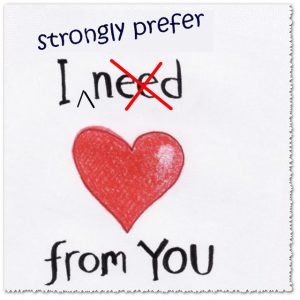 Most so called “needs” fall into what I call “disguised shoulds.” It is difficult to recognize these as such because “I need what I need” seems so reasonable and like common sense.. I NEED love. I NEED this job I NEED success. I NEED people to cooperate and act kindly toward me. I NEED to have a family, spouse, kids, significant other. True, threats to our economic and social survival can indeed seem like threats to our actual survival. Fortunately, they are not, and while needs seem, well, necessary, they are in fact not in most cases. So, once again, it may be a bummer, a big, nasty, hairy bummer when I do not get what I claim to need . . . but in reality, I only strongly (maybe very strongly) prefer it. It is not the end of the world if I don’t get what I need, even though I may “enjoy” carrying on, complaining about it and insisting that I can’t stand it.

Rare video by Dr. Ellis: Conquering The Dire Need for Love and Approval

Follow me
Latest posts by Rex Alexander (see all)
Please share the love . . .
5
Shares
... other posts by admin

This subject never fails to provoke controversy.  However, I think I can help solve it, however inelegantly. I recommend that people strive to operate primarily in the zone of preferences rather than needs, and limit the concept of need to those things where actual survival is dependent, such as the need for food, water, air, shelter.  However, some people find that extremely challenging and off putting.  This controversy  blocks an intelligent discussion of this important topic. Perhaps it would help if I introduce the idea of two different types of needs:

So, then we can say, OK, you can keep your needs (if you must, hehehehe…) However, stubbornly and courageously differentiate between when your “needs” are demands and when they are strong (possibly very strong) preferences.

Then you can honestly and courageously declare: “Although I need this thing, there is not reason why I absolutely must have it!

CS sez : If Daniel ‘Man Of Reason’s’ ‘Musting’ results in an unhealthy negative emotion (such as panic), then it’s meaning here implies an unflexible demand. This is more typical of the meaning associated with the word ‘Must.’

If Daniel ‘Man Of Reason’s’ ‘Musting’ results in a healthy negative emotion (such as as concern) then it’s meaning implies a preference. This is atypical of the meaning associated with the word ‘Must.’

In other words, check point C – the Emotional and Behavioural Consequences to see if we are demanding. It is slighlty sloppy language, but Daniels use of the word Must will mostly be defused by his REBT theoretical insight.

If the REBT model is correct–as I certainly believe it to be–changing one’s thinking will change emotions. Period. I would not say “always” or “in all cases” because those absolutist statements are unhelpful and  inherently impossible to prove or disprove. If, however, we accept the intimate relationship between thinking, emoting and behaving (and if we don’t, why are we bothering with REBT in the first place?), then thinking, emoting and behaving are entwined, are heads and tails on the same coin, as it were. If you change one, the other has got to change. If one changes their thinking but experiences no change in emoting, it could be for different reasons. They simply might not believe what they are telling themselves. Or, they might hold two beliefs, the old irrational one and the new rational one they are trying to convince themselves of. If the irrational brief remains the stronger of the two, they will not experience much emotional change. They key word is “change.” Just because one can put together an elegant argument, does not mean they are actually uprooting their indoctrination and addiction to their irrational beliefs.  This is not accomplished merely through the ABC technique.  Often, it needs to be supported and reinforced by other techniques as well as all-important behavioral “home work.”  For example, what good is ABCing your fear of public speaking if you never give any speeches? The only way you could prove that you really believe what you are telling yourself is by giving a speech, perhaps many speeches.  If your experience in the real world matches up with your conclusions in your ABCing, then you can be pretty sure you  (1) Actually believe what you are telling yourself, and (2) have accomplished a fundamental change.

CS sez : yes, absolutely, well said Rex. My point is just as long as new users don’t add secondary anxiety – meta-emotional – disturbance to their primary, target problems, with “ I must use REBT perfectly to solve my emotional problems, and if and when I can’t, it’s awful and I must be faulty etc etc lol.