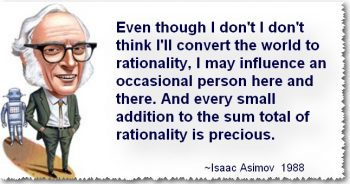 Even though I don’t I don’t think I’ll convert the world to rationality, I may influence an occasional person here and there. And every small addition to the sum total of rationality is precious.                      ~Isaac Asimov -1988″

Born on January 2, 1920, in Petrovichi, Russia, Isaac Asimov immigrated with his family to the United States and became a biochemistry professor while pursuing writing. He published his first novel, Pebble in the Sky, in 1950. An immensely prolific author who penned nearly 500 books, he published influential sci-fi works like I, Robot and the Foundation trilogy, as well as books in a variety of other genres. Asimov died in New York City on April 6, 1992.

Isaac Asimov was born Isaak Yudovick Ozimov on January 2, 1920, in Petrovichi, Russia, to Anna Rachel Berman and Judah Ozimov. The family immigrated to the United States when Asimov was a toddler, settling into the East New York section of Brooklyn. (Around this time, the family name was changed to Asimov.)

Judah owned a series of candy shops and called upon his son to work in the stores as a youngster. Isaac Asimov was fond of learning at a young age, having taught himself to read by the age of 5; he learned Yiddish soon after, and graduated from high school at 15 to enter Columbia University. He earned his Bachelor of Science degree in 1939 and went on to get his M.A. and Ph.D. from the same institution. In 1942, he wed Gertrude Blugerman.

In 1949, Asimov began a stint at Boston University School of Medicine, where he was hired as an associate professor of biochemistry in 1955. He eventually became a professor at the university by the late 1970s, though by that time he’d given up full-time teaching to do occasional lectures.

‘I, Robot’ and ‘Foundation’

Yet even with his impeccable academic credentials, writing for general readers was to be the professor’s passion. Asimov’s first short story to be sold, “Marooned Off Vesta,” was published in Amazing Stories in 1938. Years later, he published his first book in 1950, the sci-fi novel Pebble in the Sky—the first in a line of titles that would mark a highly prolific writing career.

An influential vision came with another 1950 release, the story collection I, Robot, which looked at human/construct relationships and featured the Three Laws of Robotics. (The narrative would be adapted for a blockbuster starring Will Smith decades later.) Asimov would later be credited with coming up with the term “robotics.”

The year 1951 saw the release of another seminal work, Foundation, a novel that looked at the end of the Galactic Empire and a statistical method of predicting outcomes known as “psychohistory.” The story was followed by two more installations, Foundation and Empire (1952) and Second Foundation (1953), with the series continuing into the 1980s.

Asimov was also known for writing books on a wide variety of subjects outside of science fiction, taking on topics like astronomy, biology, math, religion and literary biography. A small sample of notable titles include The Human Body (1963), Asimov’s Guide to the Bible (1969), the mystery Murder at the AB A (1976) and his 1979 autobiography, In Memory Yet Green. He spent most of his time in solitude, working on manuscripts and having to be persuaded by family to take breaks and vacations. By December 1984, he had written 300 books, ultimately writing nearly 500.

Asimov died in New York City on April 6, 1992, at the age of 72, from heart and kidney failure. He had dealt privately with a diagnosis of AIDS, which he’d contracted from a blood transfusion during bypass surgery. He was survived by two children and his second wife, Janet Jeppson.

Over the course of his career, Asimov won several Hugo and Nebula Awards, as well as received accolades from science institutions. He stated during a televised interview that he hoped his ideas would live on past his death; his wish has come to fruition, with the world continuing to contemplate his literary and scientific legacies.

PLEASE ADD YOUR COMMENTS, QUESTIONS,
OPINIONS IN THE BOX BELOW. WE