I reckon that most people at first regard rational and logical as pretty much the same thing. Fair enough as that is the first definition in New Oxford American Dictionary

It is important, however, to appreciate that REBT does mean rational as logical, but expands this meaning to include the idea helpful.  In most cases helpful  is as important as logical, and in many cases it is the more important. In REBT we not only want our actions to be logical, but helpful as well. Helpful in what way? More REBT shading; helpful is thinking, emoting and behaving in ways that help us get more of what we want and less of what we don’t want, but–very important–in socially responsible ways. A safecracker, for example, may improve his skills at safecracking which enables him to get more money (what he wants) and less poverty (what he doesn’t want).  However, safecracking is not socially responsible behavior (does not further mutually supportive relationships in his social group (outside of other safecrackers, perhaps), and is therefore irrational in REBT semantics. 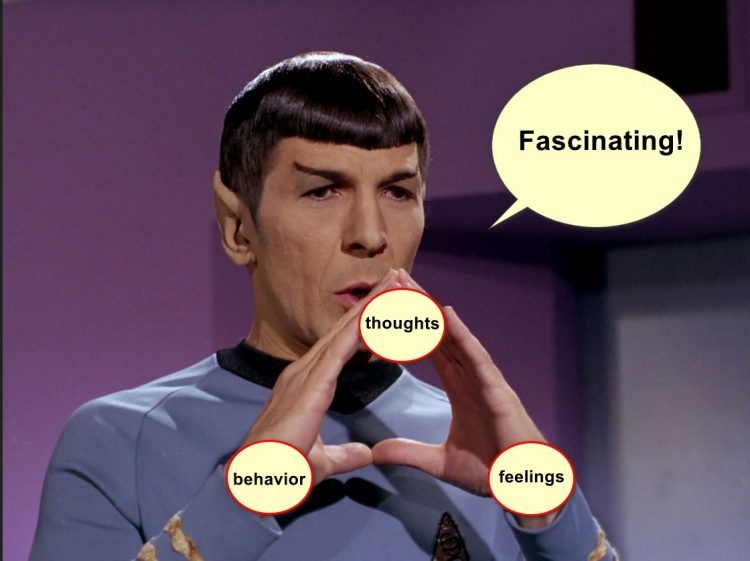 One of the erroneous conclusions people insist on making about REBT is that its goal is to get people to become clones of Star Trek’s Mr. Spock, devoid of emotion, driven by and operating entirely from logic. While Mr. Spock may be a compelling fictional character in a beloved Sci Fi franchise, attempting to emulate him in real life–if it were even possible–would not be healthy, and could even represent serious emotional disturbance and social dysfunction. For all of that, Spock was only half-Vulcan, and was never 100% successful at repressing those pesky emotions of his human half.

No, REBT doesn’t want people to emulate Mr. Spock. It wants people to have full, rich emotional lives and the E in REBT of course stands for Emotive signifying the importance REBT has always placed onemotions, not only in the context of therapy, but in the context of every day living and the  enjoyment of a full, rich life.

In regard to the confusion that rational sometimes causes, Dr. Ellis said something to the effect that if he could go back and rename REBT, he would have chosen another word, possibly cognitive.  So we freely acknowledge that the word rational  can be somewhat problematic, and it falls as an ongoing chore to REBT practitioners and boosters to clarify the issue on a regular basis. Still, confusing though it may be, I personally like the word rational because it actually stands for something, it is proactive and makes a positive philosophical statement about REBT. Cognitive, on the other hand, is neutral. It doesn’t make a statement, it merely refers to the thinking processes. Similarly, the word digestive, for example, merely describes the processes of digesting food. Both are entirely respectable words, but not very compelling or inspiring.  I like rational because, as we have said, it includes and embraces the sense of helpful and useful.  Some criteria we may want to consider in evaluating whether our thinking, emoting and behaving is helpful and useful:

If you are stuck in the groove of thinking about rational merely as logical, it will aid your understanding and practice of REBT tremendously to being thinking of rational thinking as helpful thinking, as thinking, emoting and behaving in ways which help you get more of what you want and less of what you don’t want in socially responsible ways;  as those thoughts, beliefs, attitudes, emotions and actions which aid you in living a full rich life.

I always appreciate your comments and questions.

Hi Rex, thanks so much for your very thoughtful reply! I do recognize how intertwined these inner-workings of our being are. It takes some skill and self-awareness to discern between the various layers of ourselves. And even doing so makes it no less fascinating how complex we really are!

Thanks for your kind words.

It is only for teaching purposes that we make a sharp distinction between thinking, emoting and physical sensations. In practice, to the extent that such distinctions exist, the boundaries are fuzzy, freely informing one another. There is an intimate relationship between thinking, emoting and feeling, like entwined threads in one tapestry. If you “look around,” I think you will notice that your strong emotional reactions are always accompanied by equally strong beliefs, attitudes, prejudices and other convictions. The key question is are these convictions helpful (rational) or do they lead to unpleasant emoting and self-defeating behaving?

Thanks for this very “helpful” blog post! I am a highly emotionally-driven being, as well as an empath, and a lot of times I don’t resonate with the more logic-minded ways that the psychological sciences approach human behavior. So the way that you described the “R” in REBT really helps me understand it in a way that feels good.