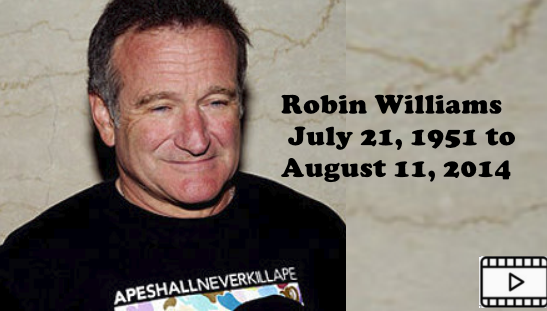 It seems like only yesterday that we were saddened and shocked to learn of the suicide of  the national treasure, Robin Williams . . .

. . . particularly, I think, members of my generation. Robin was a year younger than me, and could have continued to make people laugh for perhaps another 20 years or more.

We know that depression is dangerous and pernicious and leads to suicide in some people. What is more difficult to understand is how Robin failed to get the right kind of help, given his wealth and resources and contacts, living in the Northern California, the Mecca of pshrinks and doctors and wellness experts and somatic disciplines and alternative therapies of every shape and size. He is hardly the only one, but his death looms larger, at least it does for me.

Scroll down to watch Robins’s Live at the Met routine about alcohol and drugs.

Because of what Toffler referred to as the “demassification” of the media and the culture, Robin is probably one of the last cultural icons, familiar to and loved by people the world over. Even though we never met and I never saw a live performance, Robin felt like a friend whom I will miss.

Robin Williams Live at the Met