It’s true!  I never tire of talking about my “darling shoulds,” with apologies Thomas Aquinas, or whomever it was who referred to   “my darling sins.”  It is not surprising that this is perineal.  Dr. Ellis felt that all the various cognitive distortions and irrational beliefs can be reduced and rendered to demands, particularly absolute, moralistic demands; our old friends should, ought, must and their several disguised and overt variations. You may not entirely agree with that assertion, and that’s OK.  However, don’t lose the baby with the bath water as the implications, even if only partially correct, are staggering, suggesting  that all or most human disturbance is driven by demands.  Suck on that, Dr. Freud!   When emotions and behavior are very extreme as in fanaticism, the demands are quite obvious:  You must accept my creed or I will kill you!  Happily, most of the time, for most of us, our darling shoulds are not nearly so troublesome for us and those around us, but make no mistake, these toxic semantic processes are responsible for much human misery for the individual and for society.

I am republishing one of my posts from the old  REBT-CBT Yahoogroup.  It is in response to a question and challenge that I wish I could share with you verbatim because it is very clever and well-written.  However, with no way to obtain permission, I will just have to summarize.  A loyal reader has been reading “Feeling Good: The New Mood Therapy” by David Burns (a classic and one of our main texts) and got stuck on all the “should business,” just found it not only counter-intuitive but a bitter pill to swallow. The person says that there are plenty of ‘shoulds’ and ‘shouldn’t in life.  They are called laws and rules, and help create order and make us civilized.   The author then goes on to point out that a very early version “should” is “shalt” which immediately brings to mind the Ten Commandments.  “Thou shalt not . . . “

I probably would respond a little differently today, but my post from 2007 stands on its own: You raise some excellent and amusing points.

Don’t be afraid!  If you were to suddenly decide that all of the shoulds of the world were more subjective, less absolute and universal than you have believed them to be, I doubt that the fabric of the Universe would rupture and split!     Or perhaps I am wrong, maybe the universe will implode and we are all doomed!

Even the most seemingly obvious and universal of the Ten Commandments, “Thou shalt not kill” is full of loopholes, really big, glaring loopholes that most people have never thought about.  After all, most people don’t believe that Thou shall not kill applies to animals, self-defense, convicted murderers, enemy soldiers, escaping convicts, and if one is liberal, to fetuses or to the terminally ill.  How limited one is in killing to protect his or her life differs by jurisdiction and has changed over time, but given the proper circumstances, you are perfectly free to kill in defense of your life and in some places, property.  Different societies often have ideas of what constitutes acceptable killing that would shock our sensibilities.  While the Ten Commandments are for the most part reasonable and commonsensical, the rabbinical law which subsequently evolved from them was a really nasty cauldron of “shalt nots” which most modern people would find unacceptably intrusive and stifling.  If you want to see a fresh example of what happens when inflamed “shoulds” are running the show, look for further than to fanatics such as the Taliban [Note:  in 2015, the horrific actions of  ISIS make the Taliban look like Rebecca of Sunnybrook Farm] Of course, Christians have historically done some pretty horrific things themselves, driven by their own exaggerated system of shoulds . . . as have atheists for that matter; Joseph Stalin and Mao Tse-tung to name two.  But make no mistake, the driver in all of those cases was exaggerated and inflamed shoulds, oughts and musts (and other forms of absolute, moralistic demanding). 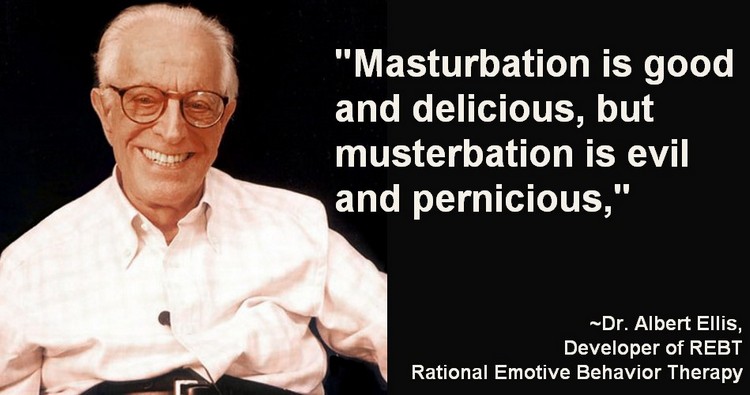 Yes, CBT-REBT is all about semantics, but not from some scholarly or merely academic” perspective.  It is much more pragmatic in wanting to observe the specific relationship and effect that language has on emotions, and how emotions then drive behavior.  More specifically, on how the language of IB’s (irrational beliefs), distorted thinking, and negative self-talk evoke and inflame negative emotions, which in turn

“Should” directed at you can, if you buy it, make you feel guilty.

“Should” directed by you outward, inflames your anger.

If you feel the other person is “bad” because he doesn’t do as he should (as you defined by you) do,  you may feel justified in punishing him because these IB’s often occur in clusters inflaming one another: People who are bad should be punished.  If you don’t do what you should do, then you are bad and you deserve to be punished, and therefore, it. is OK for me to punish you. Deserve,  by the way is just another irrational belief from the REBT perspective.

You may regard this as sophomoric until you have done enough self-observation so that during an angry or guilty incident, you begin tuning into the bitter chorus of negative, automatic self-talk hovering around you, carping and criticizing and bullying with a litany of moralistic shoulds, oughts and musts. Those voices (or thoughts) are there, and they exert a real influence on how we feel and how we behave. Fortunately, while these

thoughts are mostly unconscious, fast and fleeting, they are just below the surface of conscious awareness.  We don’t have to spend years exploring and reliving memories of childhood trauma. We just have to learn to tune into them like tuning in distant stations on an old fashioned, short wave radio.  It takes some “fiddling”, but after some practice, we get the hang of it, and these thoughts assume a vividness and immediacy. The next step is seeing (really getting it) how these thought provoke inflamed emoting which drives maladaptive, unrewarding, self-defeating behavior, which we then have distorted thinking about, which provokes disturbed emoting which lead to more self-defeating behavior . . . and so on.

Paying attention to, and hopefully dealing with, the destructive nature of our own moralistic shoulds, oughts and musts is indeed pivotal to both CBT and REBT.  If purging your darling shoulds seems offensive to your values and core beliefs, you may need to adjust your beliefs . . . or decide that REBT is perhaps not the best approach for you. It doesn’t work for everybody, and there are a few essential buy ins without which result in short circuits as you attempt to apply REBT.

Don’t be afraid!  If you were to suddenly decide that all of the shoulds of the world were more subjective, less absolute and universal than you have believed them to be, I doubt that the fabric of the Universe would rupture and split!

Or perhaps I am wrong, maybe the universe will implode and we are all doomed!

PLEASE ADD YOUR COMMENTS, QUESTIONS,
OPINIONS IN THE BOX BELOW.  WE

LOVE
HEARING FROM YOU!