How to stop being offended by every little thing 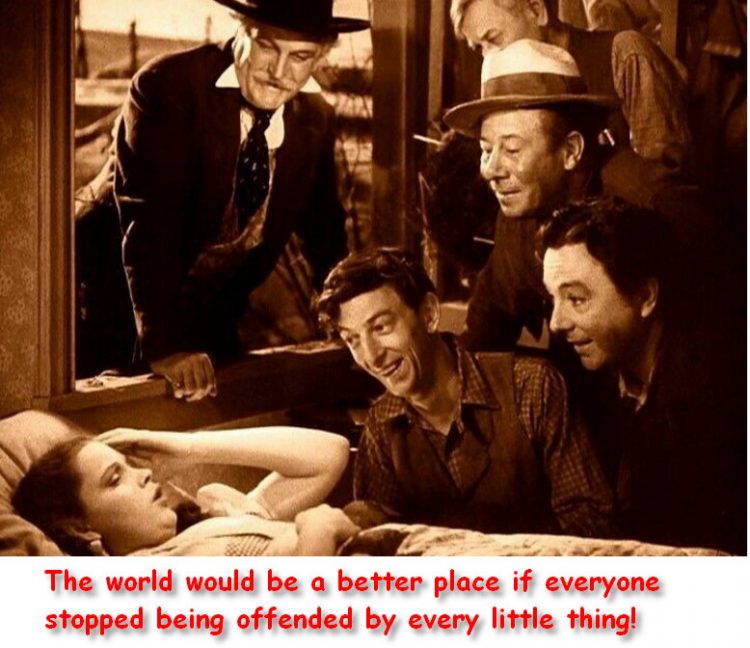 The world would be a better place if everyone stopped being offended by every little thing.”

Someone posted a captioned photo similar to this one above on facebook earlier today.   When I went to comment, it disappeared.  One of the mysteries of facebook!  Anyway, I think it is important on a number of levels, I have found the same scene and I think I have recalled the caption fairly accurately.  I am not exactly certain what the connection is to the “Wizard of Oz,” but it’s a cool pic, so let’s let that go.

Facebook seems to be flooded with captioned photos offering advice on everything under the sun, often  tips on—broadly speaking–how to improve our thinking, emoting and behaving in some way.  Often such tips are perfectly sound and valid, occasionally, they are profound.  The problem is that they rarely if ever tell us how to actually implement or accomplish this advice.  So they just become little “feel good” sound bites circulating and circulating and circulating around facebook without making much of a difference.  Semanticists refer to this type of interaction as “purring sounds” that smooth social interactions like cats, sitting in the sun and purring at one another; feels nice, but is devoid of content.

Anyway, I digress before I have even gotten started!  Hehehe . . .  We strongly agree with “The world would be a better place if everyone stopped being offended by every little thing” and this is hardly the first time or first place this nugget of wisdom has been offered up. I think many of us have a sense that the threshold for being offended is extremely low these days. This low-threshold is unfortunate, shuts down communication, creates a climate of intolerance, and ultimately leads to violence.

The problem is that we are offered this wise counsel with no clue of how to actually accomplish it!  Exactly how does one stop being offended?

Fortunately, there ARE ways.  One of them is REBT / Rational Emotive Behavior Therapy, similarly CBT Cognitive Emotional Behavior Therapy.  It goes without saying that there is a learning curve, but it isn’t rocket science, and motivated people can learn from books and self-help materials, as I did.   So, time to  bring this to a conclusion, we can learn to stop being offended by every little thing by working hard to identify, dispute/challenge and replace our distorted thinking as follows.  ALL CAPS indicate specific cognitive distortions and irrational beliefs (IBs):

We challenge and dispute such thinking until we change our absolutist, moralistic MUSTS into preferences, such as

Although I strongly prefer for people to say things that do not offend me, I guess they probably will continue to do so; not always, but predictably.  So, I had better damned well get used to it and stop unnecessarily inflaming myself over it. And although I’ll probably never like it, it is not the end of the world, and I certainly can stand it without upsetting myself. And while I may not like some of the specific things people do and say, when they do, that does not make the BAD PEOPLE or any similar global rating.

This has the effect of morphing anger and rage into more healthy annoyance and irritation.

This is the Readers Digest version, of course, but in a nutshell, that is how we honest-to-gawd begin to stop being offended by every little thing.