The Coddling of the American Mind: How Good Intentions and Bad Ideas Are Setting Up a Generation for Failure

Authors Greg Lukianoff and Jonathan Haidt know something about CBT, both theoretically and personally, and are keenly aware of how the politically correct “social justice” movement on campus and elsewhere has become almost the Bizarro World  reverse image of CBT!  This explains why I, Rex–committed lefty in my shallow and callow youth, center-left as an adult, but really more apolitical than anything else–keep finding myself drawn into political discussions I would ordinarily prefer to ignore. It has become a mental health issue in every sense of the word.

The generation now coming of age has been taught three Great Untruths: their feelings are always right; they should avoid pain and discomfort; and they should look for faults in others and not themselves. These three Great Untruths are part of a larger philosophy that sees young people as fragile creatures who must be protected and supervised by adults. But despite the good intentions of the adults who impart them, the Great Untruths are harming kids by teaching them the opposite of ancient wisdom and the opposite of modern psychological findings on grit, growth, and antifragility. The result is rising rates of depression and anxiety, along with endless stories of college campuses torn apart by moralistic divisions and mutual recriminations.

This is a book about how we got here. First Amendment expert Greg Lukianoff and social psychologist Jonathan Haidt take us on a tour of the social trends stretching back to the 1980s that have produced the confusion and conflict on campus today, including the loss of unsupervised play time and the birth of social media, all during a time of rising political polarization.

This is a book about how to fix the mess. The culture of “safety” and its intolerance of opposing viewpoints has left many young people anxious and unprepared for adult life, with devastating consequences for them, for their parents, for the companies that will soon hire them, and for a democracy that is already pushed to the brink of violence over its growing political divisions. Lukianoff and Haidt offer a comprehensive set of reforms that will strengthen young people and institutions, allowing us all to reap the benefits of diversity, including viewpoint diversity.

This is a book for anyone who is confused by what’s happening on college campuses today, or has children, or is concerned about the growing inability of Americans to live and work and cooperate across party lines.

Enlightenment Now: The Case for Reason, Science, Humanism, and Progress 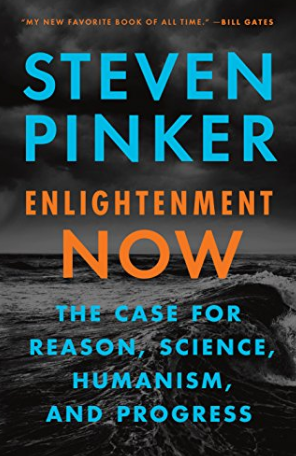 The follow-up to Pinker’s groundbreaking The Better Angels of Our Nature presents the big picture of human progress: people are living longer, healthier, freer, and happier lives, and while our problems are formidable, the solutions lie in the Enlightenment ideal of using reason and science.

Is the world really falling apart? Is the ideal of progress obsolete? In this elegant assessment of the human condition in the third millennium, cognitive scientist and public intellectual Steven Pinker urges us to step back from the gory headlines and prophecies of doom, which play to our psychological biases. Instead, follow the data: In seventy-five jaw-dropping graphs, Pinker shows that life, health, prosperity, safety, peace, knowledge, and happiness are on the rise, not just in the West, but worldwide. This progress is not the result of some cosmic force. It is a gift of the Enlightenment: the conviction that reason and science can enhance human flourishing.

Far from being a naïve hope, the Enlightenment, we now know, has worked. But more than ever, it needs a vigorous defense. The Enlightenment project swims against currents of human nature–tribalism, authoritarianism, demonization, magical thinking–which demagogues are all too willing to exploit. Many commentators, committed to political, religious, or romantic ideologies, fight a rearguard action against it. The result is a corrosive fatalism and a willingness to wreck the precious institutions of liberal democracy and global cooperation.

With intellectual depth and literary flair, Enlightenment Now makes the case for reason, science, and humanism: the ideals we need to confront our problems and continue our progress.

Factfulness: Ten Reasons We’re Wrong About the World–and Why Things Are Better Than You Think

Have you read these books?  Please leave a review
in the box below, or add your comments or ask a
question.  We LOVE hearing  from you!